LinkedIn Performing On All Fronts Since IPO

Amidst persisting news of doom and gloom, Silicon Valley continues to boom, and LinkedIn, more than any other company, has been the poster child of that boom, and a harbinger of upcoming tech IPOs.

In May of this year, LinkedIn became among the first few social networking companies to list on the stock exchange in the country. Their IPO has been called the biggest since Google’s in 2004. In their first ever quarterly result announcement as a publicly traded company, LinkedIn reported a subscriber base to have grown 61% over the year to 115.8 million. The number is significantly smaller than Facebook’s 700 million and Twitter’s 300 million members. But at least LinkedIn seems to be learning how to monetize that traffic as its results surpassed market expectations. Moreover, the quality of the audience is of a substantially higher calibre, making it attractive for advertisers and marketers, as well as recruiters.

Revenues from LinkedIn’s recruiting tools grew 170% over the year to $58.6 million for the quarter. Premium subscription sales grew 60% to $23.9 million and advertising revenue grew 111% to $38.6 million.

Courtesy of AllThingsD.com, below is a chart that captures LinkedIn revenue’s rapid rise over the past few years. 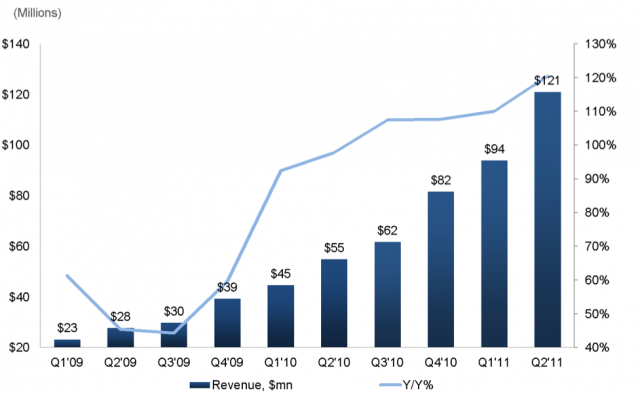 LinkedIn is projecting current quarter revenue to grow to $121 million–$125 million with full-year revenue projected to reach $475 million–$485 million compared with $243 million reported a year ago. The market was expecting fiscal year revenues of $467.6 million.

LinkedIn’s Social Networking
To help drive viral growth, LinkedIn recently launched more tools and tie-ups with other social media players. They released an “Apply with LinkedIn” product that lets users apply to open positions using their LinkedIn profiles. They have tied up with forward thinking companies including Livingsocial, Netflix, and Zynga to use this service.

LinkedIn’s Mobile Apps
The company is also focusing on developing a bigger mobile footprint and earlier last quarter launched their Android app. They also released LinkedIn Today on the iPhone and the Flipboard. LinkedIn’s mobile page views have grown by more than 400% over the last year and LinkedIn says it is committed to increasing investment in the segment to fuel further growth.

Analysts are optimistic about the company’s prospects and expect membership to increase 26% annually to more than 500 million by the year 2017. The stock is trading at $95.52 with a market capitalization of $9.0 billion. Since its IPO, it had fallen to a low of $60.14 in June of this year.