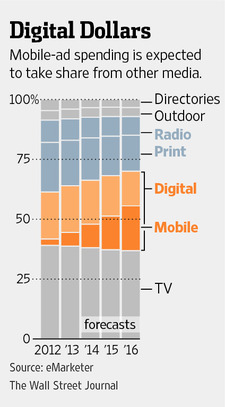 Facebook’s Financials
One company that appears to have cracked the code on monetizing this high growth mobile advertisement space is social media giant, Facebook (Nasdaq: FB). For the recently ended quarter, Facebook saw revenues grow 61% over the year to $2.91 billion, ahead of market expectations of $2.81 billion. EPS of $0.42 was also significantly ahead of the Street’s target of $0.32.

By segment, advertising revenues grew 67% to $2.68 billion and revenues from payments and other fees improved 9% to $234 million. Among other metrics, total monthly active users grew 14% to 1.32 billion with daily active users improving 19% to 829 million. During the quarter, ad impressions fell 25% over the year, but the average effective price per ad improved 123% due to the strong shift toward the higher-priced news feed ads. The quarter’s average revenue per user also increased 32% over the year to $2.24.

Facebook’s Messaging Services
Meanwhile, Facebook continues to build their Messaging services. They are now gearing to ensure that everyone will need to download their Messenger app if they wish to chat with their Facebook friends on mobile devices. Facebook has already tested this move in Europe and were pleased with the response there. They believe that they will be able to improve the apps if they are focused on them as two different apps. Facebook’s users exchange nearly 12 billion messages daily and the Messenger app is being used by more than 200 million people a month.

Facebook also plans to improve the Messenger’s user engagement by adding additional services. For instance, they are rumored to be looking to enter into a tie up with cab hailing service provider Uber. While Facebook has not confirmed the plans, analysts believe that they are working to get Uber’s ride-sharing reservation capabilities embedded into the Messenger app.

Earlier last quarter, Facebook also launched Slingshot, which is a take on Snapchat as it lets users share self destructing smartphone photos and videos. Released for iOS and Android devices, Slingshot does not require a Facebook user account for message interaction. Instead, users will have to share their photos with a friend to be able to connect with each other. Facebook has levied such rules to manage privacy concerns. Till now, Facebook has struggled at replicating Snapchat’s success with not only Poke failing, but also talks to acquire Snapchat falling through. It will be interesting to see if Slingshot gets a better market reception.

Facebook’s Acquisitions Continue
Facebook recently announced the acquisition of LiveRail and Pryte. Last month, Facebook bought the video ad startup, LiveRail in a deal estimated to be valued between $400 million and $500 million. LiveRail’s services help video ad publishers improve their ad performance by delivering a technology that ensures better ad targeting. Additionally, their real-time bidding platform lets both marketers and publishers assess the open video ad inventory available to them and place their ads on the best available option. They were estimated to have net revenues of $22 million last year and boasted of customers like ABC Family, A&E Networks, and Major League Baseball. The acquisition will help Facebook improve their video ad offerings.

In June this year, Facebook also announced the acquisition of Finland-based mobile data plan firm Pryte. Pryte’s services have not been publicly launched, but the company was working with wireless operators to help provide mobile-based wireless Internet access to the phone users. Terms of the deal were not disclosed.

Facebook’s E-Commerce Moves
After addressing advertising, it looks like Facebook is ready to tackle e-commerce as they continue to experiment with various options. They recently announced the closure of Gifts and instead are now testing a ‘Buy Button’. The new button on Facebook feeds will let users buy products directly from companies when they click on the ads posted on the social network. Some believe that Facebook will soon be able to sell this button to major retailers, thus transforming themselves to an e-commerce store. I would be interested to see whether Facebook uses the e-commerce button as yet another ad unit, or introduces an affiliate commission based business model to reap a significant portion of the e-commerce revenues generated by its hundreds of millions of users.

Finally, Facebook hasn’t even started its exploration of Search Advertising yet. That is a whole other market waiting to be monetized!

For now, Facebook’s stock is trading at $74.68 with a market capitalization of $194.16 billion. It touched a record high of $76.74 last month soon after their results announcement.