The comScore Ad Metrix report for the Q1 2011 U.S. online display advertising market reports that nearly 1.11 trillion display ads were served to U.S. Internet users during the quarter. The researcher estimates that the U.S. market currently has nearly 300 individual advertisers spending at least $1 million a quarter on display advertising. Social networking phenomenon Facebook led the market with 346 billion display ad impressions, accounting for 31.2% of the market, compared with a 16.2% share a year ago. Yahoo! sites came in a distant second with 112 billion impressions and 10.1% share followed by Microsoft sites’ 54 billion impressions or 4.8% share. Below is a graphic representation of the monthly movement of the display ad shares, courtesy of  The Wall Street Journal. 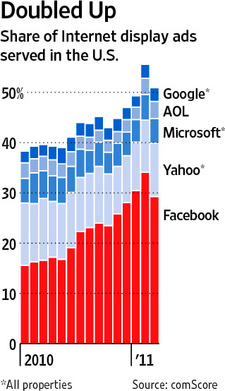 Facebook’s IPO Status
Despite growing pressure, Facebook maintained silence on their IPO status. They are expected to begin filing financials by next April. But the market has been abuzz with revised valuation figures. According to analysts at Wedbush Securities, Facebook could be well worth $112.5 billion today and will be worth over $200 billion by 2015.

Deals on Facebook
Earlier this year, Facebook launched Check-in Deals that let users get special deals when they checked in to a local business on their smartphone. They enhanced the feature now with Deals on Facebook that is their version of the Groupon’s service that also lets users share local deals with friends on Facebook. Additionally, users can also get email notifications of local businesses offering special deals. At present the service is available only in five cities in the country, Atlanta, Austin, Dallas, San Diego, and San Francisco, with plans to expand in other markets. Facebook is also working with other sites such as aDealio, Gilt City, HomeRun, kgb deals, OpenTable, Plum District, PopSugar City, ReachLocal, Tippr, viagogo, and zozi so that users can also buy their deals on Facebook.

Facebook’s Initiatives to Increase User Engagement
Facebook continued to launch services that kept users engaged. They recently added Questions to the portfolio. Questions is a feature where the user poses a Question to their friends as part of his/her status message. Friends are able to respond to the question through the comment box, which is a new way to increase interaction among friends.

Earlier this year, the company launched Sponsored Stories. These are “stories” that appear in a user’s news feed as and when their friends interact with or even like the page of businesses and organizations on Facebook. Facebook is monetizing this initiative by earning revenues for republishing these messages that contain the name of the advertised company to Facebook friends.

To continue to develop their mobile offerings, they acquired Snaptu, an Israel-based startup that develops applications for simpler feature phones. The acquisition is said to have cost Facebook between $60 million and $70 million and will not only help Facebook establish presence in Israel, but also expand its mobile offerings. Recently, they also collaborated with INQ to ensure that their upcoming Android based Cloud Touch and Cloud Q phones will feature Facebook integrations with single sign-on and one-touch access to Facebook features. Finally, they tied up with HTC for the ChaCha and Salsa phones to feature a dedicated Facebook button that lets users update their status, upload photo, share articles, and check in to places.

The recent LinkedIn IPO was expected to test the market for potentially bigger IPOs like those of Facebook. The initial results from that listing seem positive. Many are hopeful that Facebook too will manage to draw impressive valuations. But, whether they can justify those valuations with long-term monetization models remains in question.

I have been perplexed by this question lately … sites with extremely high levels of traffic are monetizing very poorly, their skyrocketing valuations notwithstanding. And they don’t use one of the most powerful monetization models out there: affiliates, meaning revenue sharing. I put myself in the heads of the CEOs of the usual suspects, and I am somewhat befuddled. What seems obvious to me is apparently not that obvious. They prefer sponsorship and CPM advertising to percent of revenues!
Of course, if I have a high-quality user experience, I would not market junk en masse through a generic affiliate program. But I absolutely would pick a set of quality products and services that align with my site’s brand and philosophy and use those to monetize my user base. If I don’t, I am leaving money on the table, and in most of these cases, lots of money.
Apparently, I am missing something in this rather simple thought experiment. Would you help me broaden my understanding of the topic? Please use the comments section to discuss further.
As related reading, let me offer you my recent interview with Deborah Sweeney of MyCorporation, who is not leaving money on the table. This conversation really made me stop and think deeply about this issue, as did a number of conversations with Dan Serfaty, CEO of Viadeo, a professional network with more than 35 million users.
Hacker News
() Comments