After a brief fumble last quarter, Apple is back with a bang. The new version of the iPhone has been met with strong acceptance, and Apple beat Android phones in the U.S. to become the leading smartphone device in the market. According to Kantar Worldpanel research, iPhone sales grew 128% in the last quarter of 2011 to 37 million units. Within the U.S., iPhones have a 44.9% market share, marginally ahead of Android’s 44.8% market share. Android continues to dominate in the European markets, but Apple is catching up. In the U.K., during the December quarter last year, Apple’s share grew 34% compared with 22% a year ago.

Apple’s financial prowess, especially in comparison to its competitors and other tech giants has been nicely summarized in this infographic published in The Wall Street Journal. 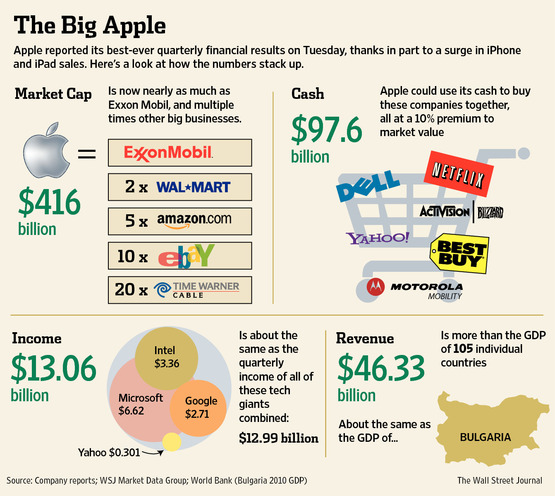 Apple’s Product Upgrades
Apple maintained silence on upgrades for their products. However, the market is expecting a new iPad version in March 2012, followed by the much-awaited iPhone5. Analysts expect that the iPhone 5 will have features such as accessibility to the iCloud Service, a higher resolution camera, and a 4-inch screen. The iCloud Service will let users automatically sync with the iCloud to enable data storage on the cloud and not on the phone. In addition, the company is expected to be in talks with music label companies to license songs for the iCloud.

The iPad 3 is also expected to be sleeker and 20% smaller than the current iPad 2. The device will operate on the iOS 5, an upgraded 5 megapixel camera, and a fingerprint-proof screen.

Apple’s Acquisition
Apple ended the quarter with a cash balance of $98 billion, and management has finally decided to use some of that cash in acquisitions. Earlier this month, they acquired Israel based flash storage company Anobit for $390 million. Anobit is a fabless semiconductor company that has developed a data signal processing  technology that enhances flash memories to provide storage solutions for enterprise and mobile markets. Apple isn’t known for acquiring hardware companies, but analysts believe that given that they account for 23% of the world’s flash memory consumption, the acquisition may help them save costs as well as push the envelope on R&D.

Apple is trading at $446.66 with a market capitalization of $415.13 billion. The stock touched a 52-week high of $454.45 earlier today, briefly regaining the title of the world’s most valuable company.

Analysts believe that Apple still has a lot of growth ahead. Market reports estimate that a total of 10 billion Internet connected devices will be available within the next few years. Apple holds 25% of that market, and thus has a big opportunity for growth. By 2020, five billion people will be on the Internet. What percentage of that population will be using Apple devices? An increasingly larger one would be my guess. No other vendor is even remotely close in terms of understanding of consumer electronics today. That dominance will enable the company to cover broader ground, including the emerging markets.

Perhaps a trillion-dollar market cap is on the horizon!

Also read that at this rate, over the next decade, Apple market cap would touch 3 trillion!Thats more than the GDP of France or Brazil!!