UCWeb Eyes IPO on the Wings of the Mobile Web

Market data suggests that while there more than 1.2 billion computers worldwide, there are more than 6 billion cellphones, including smartphones, in the market. Analysts believe that because cellphones are less expensive than computers and access to the Internet is more easily available than fixed-line Internet, especially in emerging markets, there is an increasing adoption of mobile web browsers. In China, the number of smartphone users exceeds the number of smartphone users in the U.S., making that side of the world a high-growth market for mobile browsing technology. In the below graphic, courtesy of allthingsd.com, one can see how mobile Internet browsing has caught up with desktop browsing in the Indian market. 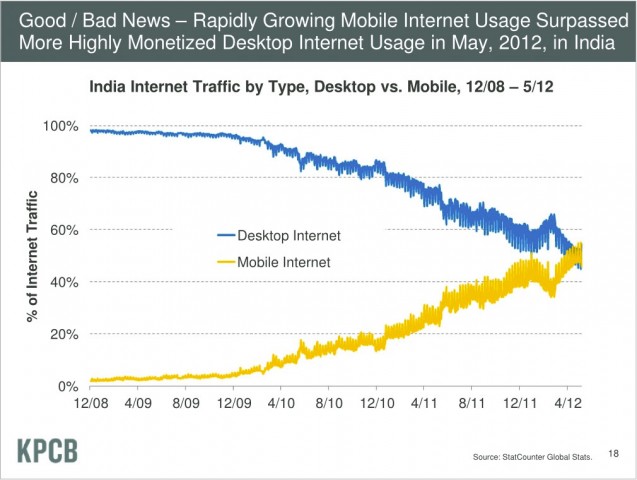 UCWeb’s Financials
UCWeb is a China-based developer of mobile browsers. The company was founded in 2004 and offers its mobile browsers for multiple operating systems, including the iOS, Symbian, Windows, Win CE, Java, MTK, and BlackBerry and Android-based devices. Its flagship browser, UC Browser, is available for free download on more than 3,000 cellphone models sold by more than 200 manufacturers.

UCWeb’s network of independent servers is located in Asia, North America, and Europe and helps cater to more than 300 million users in more than 150 countries. UC Browser is available in seven languages, including English, Russian, Portuguese, Chinese, Indonesian, and Vietnamese. As of September 2011, the browser had reported more than 1.5 billion downloads, and usage had grown to more than 100 billion page views per month. Since the company caters to the emerging Asia Pacific market, it expanded its operations by opening its overseas office in India. It claims to have more than 50% market share in China and a 20% share in India.

UCWeb earns revenues through advertising and virtual good sales through its browser. Although it did not disclose financials, it confirmed that it earns 75% of revenues from advertising and 25% through sales of virtual goods. Other market reports suggest that UCWeb earned more than $70 million in revenues last year. Further, unlike many other Internet-based companies, UCWeb claims to be a profitable entity.

UCWeb’s International Expansion
Now, the company is looking for further international expansion and is targeting the U.S. market. UCWeb is said to be customizing its browser for the American market by adding more services to the it. Earlier this year, it entered into a tie-up with Evernote. Through the partnership, UCWeb’s mobile browsers now include features that let users save and share information through Evernote’s note-taking services. UCWeb is also working to open an office in the U.S. by the end of this year.

To date, the company has raised an estimated $80 million-$100 million in venture funding. Its latest round of funding was in early 2011. Investors include Alibaba Group, Ceyuan Ventures, GGV Capital, Lei Jun, Morningside Ventures, and Nokia Growth Partners. Details of the valuation are not publicly available. The company is now looking to raise additional funds through a stock market offering in the U.S. markets. Its IPO is expected next year.