2016 IPO Prospects: Is Uber Ready to Ride the Stock Market?

If there is one company that has surprised everyone with its meteoric valuation rise, it is San Francisco’s Uber. The ride-sharing app provider has defied all controversies and sane judgements about sustainable valuations in the past year. The market is eagerly waiting for it to go public, but till last year with private funding coming easy, Uber was not too keen on listing.

Since being founded in 2009 by Travis Kalanick and Garrett Camp, Uber has become the biggest name in ride-sharing services. Through its app, users in over 300 cities across 68 countries are able to order cabs and pay for these rides. According to a PriceWaterhouseCoopers report, the global sharing economy is expected to grow from $15 billion last year to $335 billion by the year 2025. Uber is already making its presence felt in this economy.

It earns revenues in the form of transaction fees for every ride booked through its app. Its detailed financials are not disclosed, but analysts estimate that it charges a 20% fee on the fare. According to an investor presentation that was leaked to Reuters, Uber was looking to end 2015 with gross bookings of $10.84 billion. At 20% commission, that translates to revenues of over $2 billion. The reports revealed that Uber was forecasting gross bookings to grow to $26.12 billion this year or $5.2 billion in revenues this year. Bookings have grown from $2.91 billion in 2014 and $687.8 million in 2013. Confirmed financial details are not available, but analysts estimate that the company is still turning in losses as it needs to pay out heavy incentives to drivers to gain market share.

Interestingly, Uber’s valuation has crossed the valuations of bigger and older car companies like GM and Ford. Here is an interesting chart, courtesy Forbes, which shows this spectacular comparison. 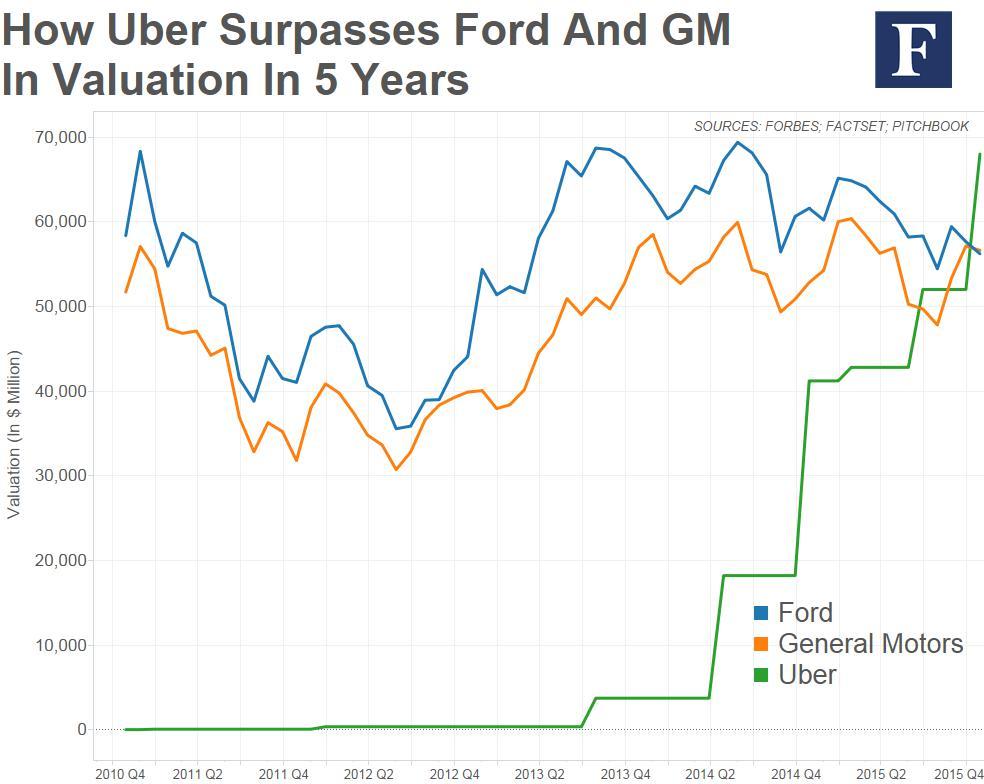 Uber’s growth has not come easy. The company has faced several regulatory concerns and has been banned in cities. Ride-sharing companies face criticism from regulated taxi companies as they operate as unregulated cabs in a city. Earlier this year, Uber was in trouble in New York as it was non-compliant to requests from the city’s Taxi & Limousine Commission with regards to request for data. Additionally, there are safety concerns due to missing driver background checks.

Analysts have always expected Uber to be more than just a ride-sharing company. They expect it to become a logistics powerhouse instead. Uber has been trying to make inroads into the segment, but hasn’t delivered successfully so far. Uber had launched a same day delivery service for local retailers, but did not see enough traction. Matters were made worse with the launch of Amazon Flex, which is an Amazon backed service that pays out $18-$25 an hour to drivers who are willing to sign up for a minimum two-hour shift to deliver goods in their city. Uber’s food delivery service UberEats that delivered food for popular restaurants in New York City, Chicago, Los Angeles, Toronto, and Barcelona did not fare well either.

Over the past year, Uber’s competition has also increased. Besides Uber, San Francisco is home to another ride-sharing company Lyft. Unfortunately for Lyft though, it has always been a second runner and thus hasn’t seen such high valuations. Lyft hasn’t expanded internationally, but it offers stiff competition to Uber within America. Then there are bigger players like Google who are expected to be eyeing the market. According to market reports, Google has been working on its own ride-sharing app and sees it as a possible opportunity to deploy its driverless cars. That would indeed be formidable competition if riderless cars manage to cross regulatory and adoption hurdles anytime soon! Currently, Uber’s poor pay structure for its drivers is a matter of constant irritation.

Despite these issues, analysts expect Uber to go public soon. Till last year, Uber wasn’t too keen on going public as it was able to get funded privately instead. But the investors would be looking for an exit, and an IPO is the only viable path at these valuation levels.

The ride-sharing market may have favored Uber the most, but others haven’t done too bad either.

The second biggest player in the industry in the US is Lyft. It operates in over 150 cities in the country and has a fleet of more than 100,000 drivers. The service claims to have over 40% market in San Francisco and Austin. It is making bigger inroads into New York through its Lyft Line service, which is their version of the carpool. Its gross bookings in 2015 were trending at annual run rate of a comparatively modest $1 billion. Analysts estimate that Lyft recorded $130 million in revenues in 2014 and had grown to $46.7 million in revenues in the first half of 2015. It continues to suffer losses and for the first six months of last year, it had already clocked $127 million in losses.

Like Uber, Lyft too is venture funded and has raised $2 billion from investors including Icahn Enterprises, Rakuten, Coatue Management, Andreessen Horowitz, Founders Fund, Mayfield Fund, FLOODGATE, K9 Ventures, and fbFund. Its last round of funding was held in December last year when it raised $1 billion in a round led by General Motors at a valuation of $4.5 billion. It is a modest number when compared with Uber’s valuation, but it too has grown significantly from the $700 million valuation in April 2014.

The growth in valuation of ride-sharing companies is not restricted to the US-based players. International ride-sharing apps are also seeing phenomenal valuation increases. Case in point being India’s Ola Cabs. Bangalore-based Ola was founded in 2011 by engineers Bhavish Aggarwal and Ankit Bhati. Today, Ola is among the fastest growing companies in India that is posing stiff competition to Uber. It has grown by 30 times over the past year and has over 350,000 drivers spread across more than 100 cities in the country. It caters to more than a million rides a day and is the third most valued venture-backed startup in India. Meanwhile, Uber operates in 22 cities and is looking to grow to a million rides by next year in India. Ola’s massive market share has been attributed to its offerings which include the standard black & yellow street cabs in Mumbai, three-wheeler autorickshaws in a few cities, and yellow taxis in Kolkata. It has also introduced a social ride-sharing option for socially-networked groups and to help people during the heavy rains in Chennai, Ola also introduced temporary ferry boats for rescue operations.

Ola’s revenue rate was about $500 million in 2015. Ola has been venture funded with $1.2 billion in funding rounds led by DST Global, SoftBank Capital, Sequoia Capital, Steadview Capital, Tiger Global Management, and Baillie Gifford. Its last round of funding was held in November 2015 when it raised $500 million in a round led by Baillie Gifford at a valuation of $5 billion. An earlier round held in April 2015 had valued them at $2.5 billion.